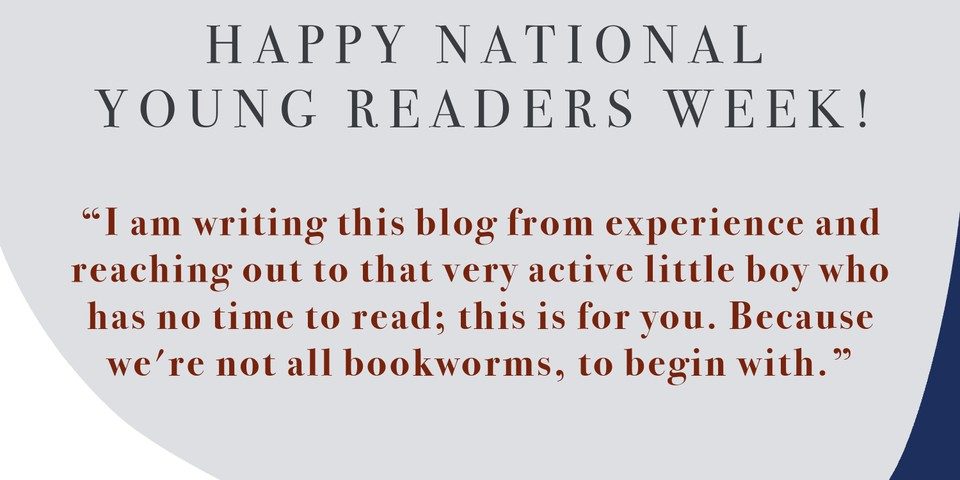 This week is National Young Readers Week, and we have asked Liam Jenkins, author of Dylan McFinn & The Sea Serpent’s Fury, to write about how he discovered reading.

I am writing this blog from experience and reaching out to that very active little boy who has no time to read; this is for you. Because we’re not all bookworms, to begin with.

Growing up in Hampshire, UK, in the early ’90s, I enjoyed spending all my time outdoors, playing in the park, playing lots of football (Soccer), climbing trees and other boisterous activities!

I had the most vivid and creative imagination and making up my own stories, but I was always too busy having fun outdoors to dedicate much time to reading. That was BORING! Telly was much more enjoyable.

However, as I hit my Tweens, this changed. I started to enjoy reading more—Comics and books with lots of pictures, not quite the works of Dickens but still better than the old Goggle Box.

It was the works of Terry Pratchett that really piqued my interest. The book moving pictures started my collection, and for any new readers, any of his books is a good place to start. He is arguably the most excellent World builder there has ever been; I recommend any of his books.

The modern landscape is quite different to those early 90’s days when technology was no more advanced than a 32-bit games console. Kids today are bombarded with tech 24/7. Distraction is everywhere.

So my mission when I set out writing the Dylan McFinn Chronicles was to write a series that held that 12-year-old attention span longer than five minutes.

But if Mermaids, Monsters, Myths and legends are not your thing, then I suggest this. Reading is similar to music. When you’re young, you ‘dabble’ with many different music genres, and it can take a while before you find ‘your sound’ you begin to explore the genre, tumbling down rabbit holes and unearthing some real gems.

You should adopt the same adventurous approach when it comes to reading. If you need to know where to begin, try everything, and you will find the genre for you, and you’ll start to love reading.

As mentioned, It started with Terry Pratchett for me. Also, learning about the Greek, Roman, and Norse Gods at School set me firmly on my writing journey. I was hooked on anything attached to Myths, Legends, Gods and Goddesses.

Luckily, not much has changed in my adult life. I am up for anything alternative, a road less trodden or a less obvious path, Ghosts, Aliens, Gods, Fables, Myths. I’m all over it.

So, start exploring, start looking for Joe and follow your Bliss.

If you follow your Bliss, you put yourself on a kind of track that has been there all the while, waiting for you, and the life you ought to be living is the one you are living – Joesph Campbell.

About the Author – Liam Jenkins introduces readers to Dylan McFinn, an ordinary twelve-year-old. Ordinary, that is if you ignore the fact that he lives deep under the Pacific Ocean with his sea-captain father, his annoying little brother and his mother, Varuna – who is definitely not a mermaid. As he battles monsters and maelstroms on his first day as a teenager, Dylan discovers he can be an awful lot more than he imagines …